In times past and in various regions where children play, there existed a wide and strange vocabulary exercised in the game of marbles. A few words were made by children and forgotten as children grew into adults. A few words survived and were remembered and even recorded in dictionaries and journals. Some words and phrases can be found in stories from those periods when marbles were played by so many children. The section below describes the many names that have been used to desribe different games of marbles. Maybe they will inspire you to set up a game with your friends, and you can make up fantastic names too.

Oh Marbles! for iPhone and iPad

Oh Marbles! is a marbles game for iPhone and iPad. It is based on the real idea of shooting marbles out of a circle, winning and collecting marbles.

Children everywhere have gathered to play marbles in school yards, homes, or any other place where kids play. Every marble player had marbles in different, fascinating designs. Oh Marbles is designed to present that same experience. As in the classic game, Oh Marbles presents the best experiences of playing marbles – wining, losing, collecting, trading and pondering the endless variety of marble designs. 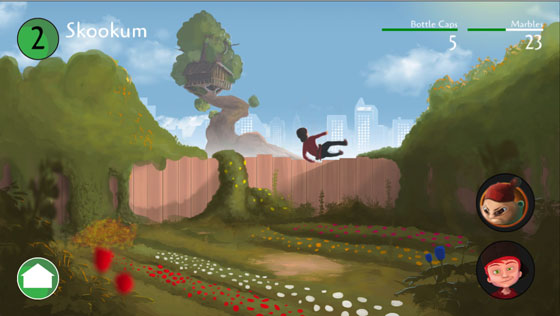 A large stone marble or a game played with large marbles. OED 1862 John P. Stillwell writes of the game as played in the 1840's. See "Poems of Rural Life, in the Dorset Dialect" by W Barnes 1848. Alsoin EDD AS boncer.

A game of marbles in which two boys alternately shoot at their Rae's, usually called bonces in this game. The marble that is kissed or touched is out of play. Also known as boss or span. The boss, or taw is pitched or tosses out and the other boss has to span the distance in order to hit the first one.

A game played with bowls OED.

A marbles game in which players attempt to roll marbles into holes in the ground, under certain conditions the winner has to allow others to shoot at his knuckles. The hole may be called bun hole (rabbit hole). Similar to golf.

A marbles game in which every player uses only one marble, each shooting alternatively. It is a variation on boss out and span. Played with regular sized marbles.

A game played with. Chestnuts

Dob in the Ring

A marbles game (John t Page, the origin of taw 1899). "As boys we used to play a game of marbles here known as "dob in the ring" which consisted of starting from a certain point known as a taw and endeavoring to Knock out with a big sob as many marbles as possible.

A game in which players keep the marbles they knock from the ring.

This variation of the ringer game requires that mibsters stand behind a line to shoot.

The game ends when all of the marbles have been knocked out of the circle.

A marbles game. Variation on holly-golly. Played with hickory nuts. Heard in Tennessee as "hul gul"

A marble game Maybe make a game scene where hundreds are in the center and you get one shot to knock out as many as possible. Make that the first game?

A marbles game of chance in which marbles knocked from the ring by a player remain in his or her possession. In the early 1900's, some school districts banned "keeps" because they considered it a form of gambling. If you are playing marbles for keeps, be sure to agree on the rules and play fair so that arguements and fights don't break out.

A game in which the players try to shoot their marbles into four holes in the ground.

A game in which marbles are placed in a line rather than in a group.

A day in which everyone plays marbles. See Moon Marble in Bonner Springs, Kansas for more info about Marble Days.

A game in which on player tries to guess whether the other has an odd or even number of marbles hidden in his closed hand.

A marbles game. See plum pudding. A game where one shoots at marbles placed in a row. Encyclopedia britanica 11th ed.

Ringer is the game upon which tournaments are played.

Whoever collects the most marbles is the winner. If you want, you can change the rules so that if a shooter remains indisee the circle, the she must leave it there and it becomes a target for the other players.

The object of the game is to knock the marbles out of the innter circle. The "taw" is the offensive marble that is used for shooting. Taw can also mean the line from where you shoot, and you can also be used as a verb, meaning "to shoot a marble."

Setup - Draw a circle that is about seven feet across. In the center, draw another circle about one foot across. Each player contributes about five marbles to put in the center circle. Players take turns shooting from anywhere outside of the larger circle for the first turn. From later turns, the player shoots from where ever his shooter rests. If a player knocks a marble outside of the inner circle, he keeps that marble and continues to shoot. he must shoot from wherever his marble rests. If a player doesn't hit any marbles out of the circle, his turn is over. Players can shoot at other players shootrs inside either circle. If a shooter is hit, the owner must pay the other player one marble. a player cannot his the other players shooter more than once per turn.

The game ends when there are no marbles left in either circle. The player with the most marbles is the winner.